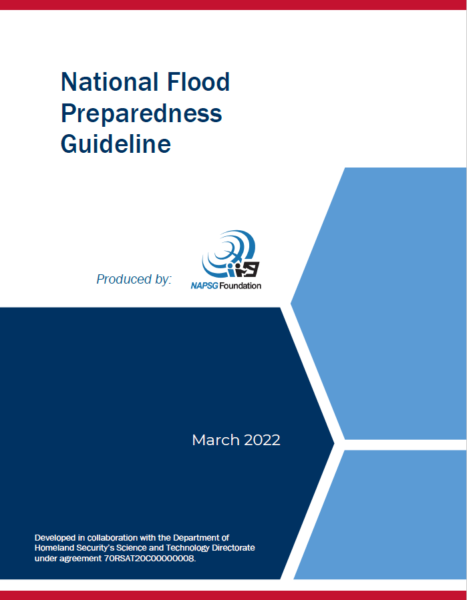 The National Alliance for Public Safety GIS (NAPSG) Foundation is pleased to release the updated version of the National Flood Preparedness Guideline (NFPG). Building upon the work done in 2017, the updated guideline was
developed by a group of first responders, technologists, GIS professionals, flood modeling experts, the private sector, academia, and other subject matter experts in flooding.

Through three virtual workshops, the group identified key data needs for the first responder community during flood disasters, as well as challenges facing the community. Major challenges such as the overwhelming amount of reliable, timely, and accessible information, the sophistication of flood modeling, and pace of technology innovation were identified and form the basis for the rest of the NFPG.

The NFPG was developed with a diverse audience in mind. Key takeaways and chapter
introductions summarize the technical content for those unfamiliar with the concepts, and
spotlights and toolkits throughout the document highlight real-world implementation
examples that are considered best practices.

How can you use the guideline?

The NFPG strives to address a complex problem and requires significant effort to implement. It should be viewed as a goal for agencies to strive for. To be successful, agencies and
jurisdictions should still:

The NFPG development is the start, not the end, of creating an interoperable system of geospatial tools and technology to aid in flood preparedness and response. You are
encouraged to leverage the resources identified in the NFPG to bolster your program, and
continually exercise, refine, and share your lessons learned with the larger community.

Challenges remain in aiding local jurisdictions with flood preparedness and response. The tools and processes outlined in the NFPG require formalized standard operating procedures, agency support, and daily use.

Funding for this guideline was provided by the Department of Homeland Security’s Science and Technology Directorate under agreement 70RSAT20C00000008.

This toolbox is designed to raise awareness and support preparedness efforts. Utilized in combination with free resources for the community such as Education & Virtual Training, Organization Standard Operating Guidelines, and National Guidance Documents, you can build your GIS capacity and resilience.

Do you have an interesting project and need support? Take a look at our capabilities, or email us if you want to start the discussion: services@publicsafetygis.org

Our expertise is in public safety GIS, and as a non-profit we are dedicated solely to your success. Download the brochure below for more information. 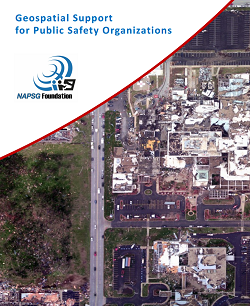